TOP 8 most harmful enterprises in Kyiv 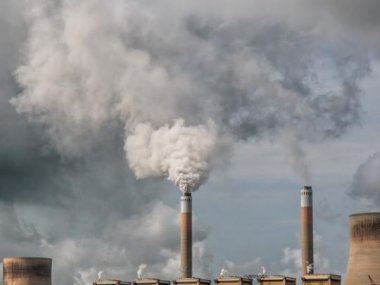 Kyiv is a city of chestnuts that attracts by its hospitality and beauty. However, if you take a closer look, you will see it from a completely different perspective, namely, mortally dangerous. There are many facilities here that slowly harm the health of citizens, that is, mountains of garbage, radiation, mercury, exhaust fumes.

Kyiv is a city of chestnuts that attracts by its hospitality and beauty. However, if you take a closer look, you will see it from a completely different perspective, namely, mortally dangerous. There are many facilities here that slowly harm the health of citizens, that is, mountains of garbage, radiation, mercury, exhaust fumes.

The capital of Ukraine has appeared outside the list of the cleanest European cities. The Razumkov Center made the TOP 8 most dangerous enterprises of the metropolis.

According to experts, the following enterprises may be included in the list:

The powerful TPP-6 emits nitrogen oxides into the atmosphere which, when combined with sulfur oxides, can fall in the form of acid rain causing irreparable harm to plants. The human immunity and its respiratory system are affected by the combustion products of fuel oil.

A similar situation occurs at TPP-5. In addition to the aforementioned emissions, the situation is aggravated by the fact that the plant does not have a process for utilizing ash and slag mixture which is also poisoning the air.

The Radon enterprise is a “radioactive waste cemetery”. For nearly 50 years, it has been a repository of radiation waste. Currently it is in a state of disrepair. In 1995, there occured a leakage of tritium that is located at a depth of 20 m.

The dangerous places of Kyiv

Currently, there are approximately 200 thousand tons of waste containing mercury on the territory of the plant “Radical”. There is no possibility to bring out mercury as the only enterprise processing of hazardous substances is located in the war zone. The main purpose of the aeration station is wastewater treatment designed to process about 3 million cubic meters of feces. Today, it processes more than 8 million. This threatens to break through the dam which will lead to the environmental disaster.

The waste incinerator “Energia” is the only waste recycling plant in Kyiv that processes more than 500 tons of waste daily. Harmful substances entering the atmosphere have caused various chronic diseases in Kyiv residents.

The plant “Zapad” is a former secret enterprise. It produced optics with the use of beryllium compounds for the defense sector. Beryllium is a very toxic element. Currently, over 200 tons of this dangerous metal is stored in containers on the territory of the enterprise without proper sealant. The concentration of this substance in the soil has already exceeded the norm by 8 times.

Landfill Nr 5 is a landfill for municipal solid waste where garbage that cannot be incinerated at Energia is taken out. The liquid draining from the garbage (filtrate) evaporates into the air and enters underground water and soil. The main products of the decay of garbage are carbon dioxide and methane.