Forest is the lungs of our planet 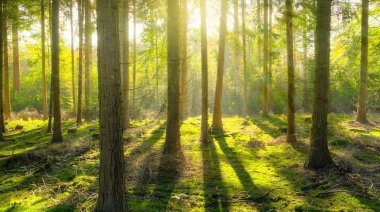 Since our childhood, we are taught to care about the environment. Any child knows that the trees are the lungs of the planet, which produce oxygen necessary for living organisms during the process of photosynthesis.

Since our childhood, we are taught to care about the environment. Any child knows that the trees are the lungs of the planet, which produce oxygen necessary for living organisms during the process of photosynthesis. But few people know that in addition to oxygen production, forest:

It’s not only the man who causes the deforestation: apart from the anthropogenic factor, there is also a biotic one, when shrubs, mosses, and lichens displace forests. Satellite data help to track the dynamics of such a process as deforestation and to draw public attention to this problem before the consequences become catastrophic.

Consequences of deforestation of the planet

The process of deforestation affects all spheres of life and leads to:

Forest is the lungs of our planet, but beyond that, it performs many important functions: improves the soil, takes care of the air filtration and creates ecosystems. Deforestation should not be neglected, as the consequences would affect all living organisms.

The dynamics of deforestation is being monitored by many organizations. The authorities of many countries limit deforestation at the legislative level and increase the administrative penalties, and many charities are engaged in planting forests, but first of all, we need to stop their destruction. Since dawn time, man has used wood as a building material for the construction of houses, production of paper and making of firewood, without thinking about the future of the planet. Uncontrolled destruction of forests without its reforestation will sooner or later lead to environmental degradation, global warming, melting of glaciers, reduction of soil fertility and extinction of animal populations. Trees are the lungs of the planet, and the absence of forests will adversely effect on all living organisms. Despite the fact that deforestation is the fault of animals, to some extent, which prevents reforestation but it’s a man who causes more damage to the environment. In the ХХ century, the destruction of forests reached a critical point, and the numbers continue to grow: today only we have a chance to stop the uncontrolled felling of trees and take care of the planet that feeds us all.

Read also: The most environmentally unsafe areas of Kiev Forest fires and ecology