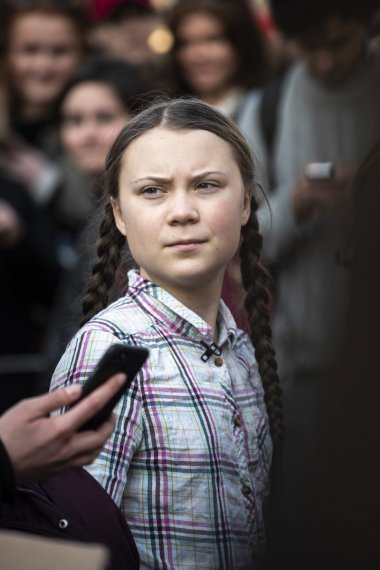 The whole world speaks of a Swedish schoolgirl, Greta Thunberg, who was not afraid of anyone and did not become silent but decided in 2018 to protest near the parliament building of her country.

The whole world speaks of a Swedish schoolgirl, Greta Thunberg, who was not afraid of anyone and did not become silent but decided in 2018 to protest near the parliament building of her country. The girl was worried about global warming. This is not surprising because, before her protest in Sweden, it was the hottest summer for the last 262 years accompanied by multiple forest fires. Therefore, Greta wrote the poster “School strike for climate” and came out in solitary protest instead of attending school classes which lasted several weeks.

She demanded that the Swedish government began to implement the Paris climate agreement. And all this took place on the eve of the election. After a week, like-minded people began to join Greta.

Many were surprised by her tough, even aggressive criticism of the government. By the way, because of this, she got many ill-wishers. Some politicians have even called Greta a “well-thought-out marketing project”. But still, most people believe in the sincerity of the girl to help save the planet from environmental disaster.

How did it all start?

Greta won a local newspaper article contest on climate issues as she began to take an interest in ecology from the age of 8. After her work was published, an activist Bo Thoren from the Fossilfritt Dalsland eco-organization contacted the girl and invited her to join his protects. He gave Thunberg the idea of ​​a school strike against climate change. Greta herself admitted that her idea was based on protests by US students who were frightened by mass shootings in Florida schools.

The real results of the protests of Greta Tunberg

And yet, why people do not stop talking about her? Greta has become a symbol of struggle. After her, millions of schoolchildren in over 100 cities of our planet took part in protests. Greta herself became a symbol of struggle and founded the eco-movement Fridaysforfuture. Over the year, a schoolgirl managed to make a speech at the important economic forum held in Davos, attend the UN climate summit, even D. Trump was present during her speech. She also met with the European Parliament in Strasbourg.